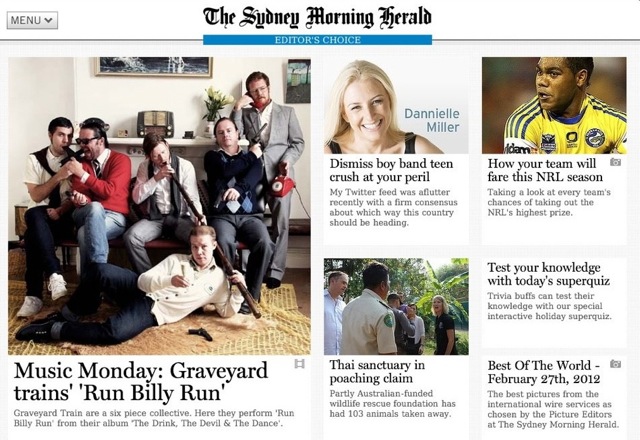 Frankly, I think it is very cool that on Monday of this week, when the rest of the nation was discussing political machinations, I managed to get teen romance on the agenda. In fact, The SMH profiled my Opinion piece as part of its “Editor’s Choice” feature. I thought I’d share it with you all here too. This was originally published in the Sydney Morning Herald, February 27th.

My Twitter feed was aflutter recently with a firm consensus about which way this country should be heading. Forget KRudd. There is, apparently, only One Direction.

Because I work with thousands of teenage girls every year and follow many online, I was privy to some revealing outpourings of devotion for this squeaky clean British-Irish boy band after they announced an Australian tour. “Don’t ask me to stop loving One Direction as that would be like stopping breathing,” said one. “I. AM. CRYING.” wrote another.

Then it got personal. My usually sensible 12-year-old daughter tried to explain to me that I should have stayed home on Friday to repeatedly call a radio station ticket competition for her. I say “tried to explain” because she actually burst into tears and could only whimper, “I just love them.” (Her usually unsympathetic little brother was so shocked, he declared he’d miss school to try to win tickets.)
Teen crushes are nothing new. I fell prey to the allure of the Construction Worker from the Village People, Ace Frehley from Kiss and David Bowie (it seems I unwittingly lusted after sexually ambiguous men in costumes).

And as tempting as it is to dismiss these outpourings of emotion, we do so at our own peril. Just ask Channel Seven, which almost had a riot on its hands when it underestimated the appeal of Justin Bieber and had to cancel his free concert. Grant Denyer said at the time, ”We just couldn’t have foreseen this scale and Sunrise hired the best security you could imagine, we hired the professionals who look after U2, Coldplay, Pink, the big acts, and even they weren’t equipped and just couldn’t handle the Bieber fever.”

The fever actually has its origins in a physical reality. The frontal lobes of teenagers are not yet fully developed. In other words, teenager’s brains are all tuned up for emotions, fighting, running away and romance.

From the Beatles to Bieber and ”1D”, it seems the more squeaky clean-cut and sexually harmless the object of desire, the more heightened the passions – precisely because the risk of the object of the affection actually posing any sexual threat is minimal. For once, teen girls feel sexually in control. They call the shots. And there is no risk of rejection.

One Direction are particularly clever at tapping into this psyche. Their big hit was What Makes You Beautiful. The lyrics include, “You’re insecure, don’t know what for. You’re turning heads when you walk through the door. Don’t need make-up to cover up. Being the way that you are is enough.”

These words sing to a generation of girls exhausted by body image angst fuelled by a plethora of air brushed images of impossible perfection. They sing too to girls tired of being dished up a diet of singers who literally slap women up (I’m talking to you, Chris Brown) and others who revel in calling them ”bitches”.

Rather than belittle, we should empathise with how very real and raw these new emotions are, just like the mother of one of my teen girl friends. “Mums so cute,” the girl said online, ”when 1D came on [TV] she said, Stop screaming & listen to your boys! LOL.”

This mum is far more likely to have her daughter open up about other confusing elements of her tumultuous teen life and include her in her emerging romantic world. The mothers who went along with their daughters to pine after Edward and Jacob, the supernatural lust objects of the Twilight franchise, realised this too.

And let’s not forget crushes have always been a vital way of bonding. Beatlemania, the Kiss Army, One Directioners, Twihards: crushes are about sharing the love. Parents probably won’t be welcome on the frontline by their daughter’s side at the concerts (no one wants their parents to see them in a state of unbridled lust surely?) but can play a vital role as part of the support crew.

As one tweeter said: “Dear parents, I’m obsessed with One Direction & not drugs and alcohol. In other words, you should be thankful for them.”