Want to help your children succeed? Then focus on their mistakes.

As adults, the single biggest mistake we make is our carefully staged, micromanaged, Instagram-filtered focus on perfection. We’ve created a generation of kids and parents who are paralysed by the fear of failure.

I’ve heard educators tell teens that one cyber-misstep will mean their life is ruined. Watched young people so crushed by a school grade that was lower than they had hoped for that they opt out of school entirely and simply stop trying. Cringed as I have heard parents advise their daughters (and it is so often the girls that hear this message) that should they make a choice in a relationship that later proves unwise? That their reputations will be forever sullied.

What nonsense. And what a waste of potential learning opportunities.

The truth is we are not defined only by our successes, but rather by how we manage our falls.

Catastrophising, or using the dark-edged shame as a device to elicit change, not only doesn’t work, but may have devastating consequences for someone who thinks there is no way forward and feels hopeless rather than hopeful.

It is much more valuable to help our children view their disappointments in the same way that an ever-resourceful friend of mine does hers: as a #disastertunity.

How might you handle people asking you about why you did this? What could you do that would help you improve from here? Who do you need to connect with to support you to move on? What might you learn about yourself, and others, from this moment?

As adults we should be brave too about sharing our own failings for these give our children the sense that they also can move on after a stumble. Kids don’t need or want perfection from their parents, what they yearn for is authenticity.

In fact, the reality is that despite the cautionary tales we often feed our children, we are all instinctively far more drawn to those who have lost and learned. Even the Ancient Greeks knew that heroes who displayed bravery, resilience, resourcefulness and determination were far more likely to win hearts and minds than those who only ever sailed cautiously through life.

And if we really want to set our kids up for future career success, rather than just drilling them for NAPLAN, we should be teaching them to adopt Richard Branson’s philosophy and embrace failure “with open arms.”

Branson, who has had at least 14 of his own businesses fail, believes that as failure and rejection are an inevitable part of business, what will really set someone up for longevity is their ability to deal with these events.

We could all do with reframing our thinking on failure. And we could all do with celebrating more stories of those who not only tripped, but got up, dusted themselves off, and chose to simply put one foot in front of the other and move forwards again. 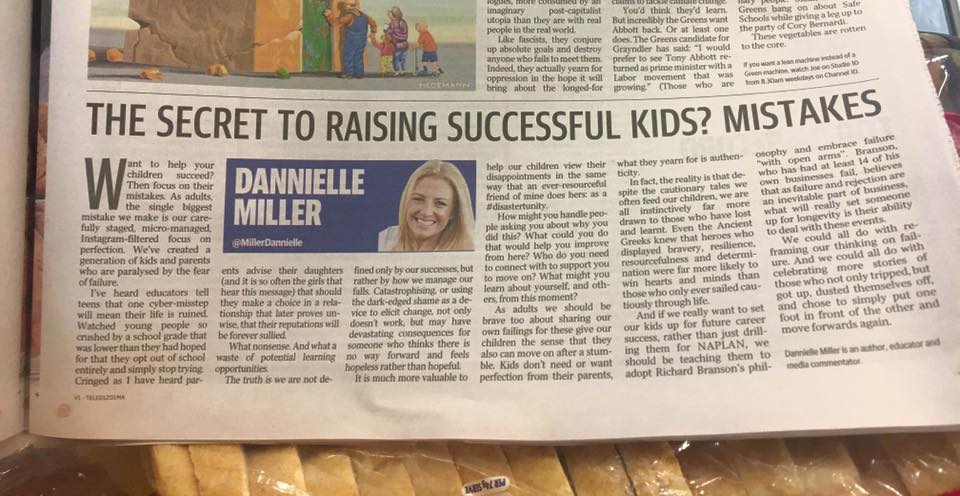 This post was first published by the Daily Telegraph newspaper, 14/5/16 and online at RendezView